Kempten. The head-up display (HUD) is definitely a driver assistance system that triggers true enthusiasm among the majority of users. In addition to this euphoria, it contributes to greater safety on the road by projecting important information directly into the driver’s field of vision. This is because the car driver is not distracted by displays in the instrument cluster, the on-board computer or the navigation system display. However, an earlier subject study at Kempten University of Applied Sciences showed that the current HUD concept still has great potential for improvement from the customer’s point of view. Therefore, a study was conducted within the Adrive Living Lab, research partner of MdynamiX, to develop a customer-oriented HUD. The key to success was a specific creativity method.

The aim of this study was to answer the following questions, among others:

At the beginning, the 30 test subjects were allowed to get to know the activated HUD during a test drive. Afterwards, the test subjects were asked for suggestions for improving the head-up display. They were then taken to a creative workshop designed for this study.

Reaching the goal with the right tools

In order to achieve a result that is primarily oriented towards the wishes of the customers, the design thinking method was used as part of a final thesis. The goal of this user-centered and iterative method is to obtain as many ideas and new aspects as possible through various creativity techniques. This methodology makes it possible to develop a superior solution from the user’s point of view while weighing economic viability, feasibility and desirability.

With a well thought-out design of the experimental environment, a room concept and the use of storytelling and mood boards, the creativity of the test subjects could be promoted. In the “Build your own HUD” area, it was now time for the test subjects to model their own head-up display for specific situations on a self-built windshield according to their personal ideas. The entire process was documented by photos, notes, video and audio recordings.

The results from workshop

On the basis of the subjects’ designs, it was possible to put together a specific concept of what the ideal head-up display would look like from the customer’s point of view. It was almost unanimously noted that the HUD should in no way restrict the driver’s view. 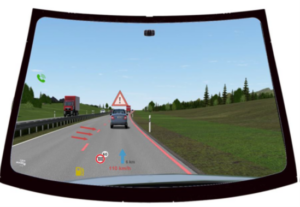 The Design Thinking method was rated very positively by the test subjects and brought a successful change to the other studies in the Adrive Living Lab – especially for those regularly participating. The test subjects were visibly excited to participate in product development and were able to generate numerous ideas through the concept of design thinking and also actively implement them in the idea workshop.

In the course of this study, it became clear that many customers would like to see more configuration options for the elements in terms of position, color, size, etc. In this aspect, manufacturers must find the golden middle, because too much freedom in HUDs is not conforming to the rules and is distracting. In conclusion, it can be said that test subjects consider workshops in which they have to become creative themselves to be positive, and thus a good approach to the ideal HUD could be developed. The design thinking method will also be used effectively in future subject studies of the Adrive Living Lab. 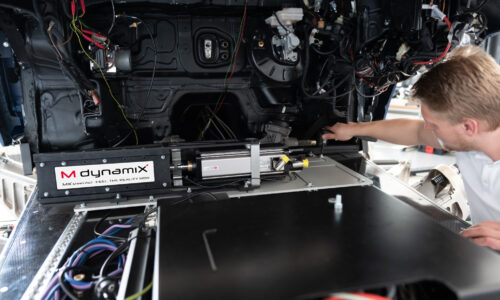 5 reasons why you need the MXsteerHiL for your steering development